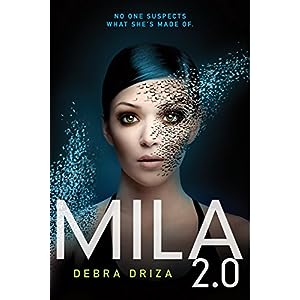 Mila 2.0 is the first book in an electrifying sci-fi thriller series about a teenage girl who discovers that she is an experiment in artificial intelligence.

Mila was never meant to learn the truth about her identity. She was a girl living with her mother in a small Minnesota town. She was supposed to forget her past—that she was built in a secret computer science lab and programmed to do things real people would never do.

Now she has no choice but to run—from the dangerous operatives who want her terminated because she knows too much and from a mysterious group that wants to capture her alive and unlock her advanced technology. However, what Mila’s becoming is beyond anyone’s imagination, including her own, and it just might save her life.

Mila 2.0 is Debra Driza’s bold debut and the first book in a Bourne Identity-style trilogy that combines heart-pounding action with a riveting exploration of what it really means to be human. Fans of I Am Number Four will love Mila for who she is and what she longs to be—and a cliffhanger ending will leave them breathlessly awaiting the sequel.

Thanks to Debra Driza, I learned something about myself I would've never suspected: Turns out, I LOVE androids!  Okay, maybe I'm not a hardcore sci-fi robots and mayhem fanatic, but when the android is a 16 year old girl who thinks she's human...count me in!

I found this book in, of all places, the dollar tree.  That gorgeous cover snagged me, and before I knew it, Mila 2.0 bypassed my entire to-be-read pile.  That's a big pile, guys.

Mila started her connection with me on page one, and it was all over from there.  Her character was deep and incredibly well developed, as were her relationships with those around her (well, except with Hunter, but I'll get into that later).  Her emotions, her perceptions...I felt them all like they were my own.  I mean, think about this:  Debra brought an android to life better than so many authors manage to do for a HUMAN character.  Talent, folks.  The action was incredible (holy fight scenes!).  I even had to stop reading at some parts just to let me adrenaline catch up.  I think the ending spot for this particular book was justified; yes, CLIFFHANGER alert!  But!  The spot marks the end to that part of Mila's life.  Everything else is a new story (which, I might add, has already been ordered from Amazon).

Now, about Hunter.  I don't buy into instant love in books, and that's exactly what this was.  She shares one date with the guy and suddenly she's willing to jeopardize her life AND her mothers to sneak a call to him?  Nahh.  Yeah, she's a teenager, but that doesn't make her stupid.  Also, I kind of felt like the book could've been about 100 pages shorter.  There was a lot of repetition, a lot of saying the same thing a dozen different ways.

Posted by Mary Elizabeth at 2:17 PM