Cover Reveal: FROM UNDER THE MOUNTAIN by Cait Spivey 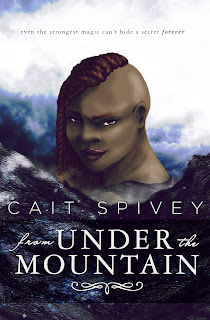 About From Under The Mountain:

As the second child of the Aridan imperial family, nineteen-year-old Guerline knows exactly what is expected of her: be unobtrusive, be compliant, and do not fall in love with her low-born companion, Eva. She has succeeded at only two of those.
But before her feelings for Eva can become a point of contention for the royal house, Guerline's calm and narrow life is ripped away from her—in the course of a single night—and she is abruptly cast in the role of empress.
Faced with a council that aggressively fears the four witch clans charged with protecting Arido and believes they are, in fact, waging war against the humans, Guerline struggles to maintain order. As her control over the land crumbles, she learns that the war is rooted in a conflict much older than she realized—one centuries in the making, which is now crawling from under the mountain and into the light. With the fate of Arido hanging in the balance, Guerline must decide who to trust when even her closest councilors seem to have an agenda.
Darkly cinematic, From Under the Mountain pairs the sweeping landscape of epic fantasy with the personal journey of finding one’s voice in the world, posing the question: how do you define evil, when everything society tells you is a lie? | Add to Goodreads 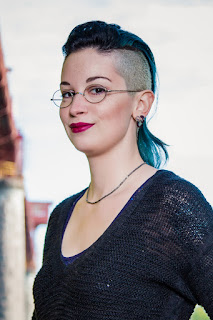 Cait Spivey is a speculative fiction writer, author of high fantasy FROM UNDER THE MOUNTAIN and the horror novella series, “The Web“. Her enduring love of fantasy started young, thanks to authors like Tolkien, J.K. Rowling, Diane Duane, Tamora Pierce, and many more. Now, she explores the rules and ramifications of magic in her own works—and as a panromantic asexual, she’s committed to queering her favorite genres. In her spare time, she plans her next tattoo (there will always be a next tattoo) and watches too much Netflix. Anything left over is devoted to her tireless quest to make America read more. She lives in Portland, Oregon, with her darling husband Matt and adorable dog Jay.
Check out more from YA fantasy author Cait Spivey online or on twitter.
Posted by Mary Elizabeth at 6:30 AM

Email ThisBlogThis!Share to TwitterShare to FacebookShare to Pinterest
Labels: Cait Spivy, Cover Reveal, From Under The Mountain, REUTS