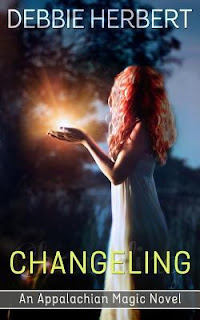 
She "thought"she was a witch...she's more Skye's a teen witch who sucks at spells and works at a metaphysical store, The Green Fairy. Strange things are happening there at night: black specks of movement out of the corner of her eye, mysterious buzzing noises, unidentified dragonfly-like carcasses in the basement, and a hidden cache of absinthe (aka fairy crack).

Kheelan is a human changeling. Raised with the fairies, he's viewed as an inferior species whose only use is to serve his kidnappers. He's been totally screwed by the Fae and his only goal in life is freedom. When he meets Skye, he sees an opportunity to escape. The last thing he needs is to be distracted by feelings for this quirky witch.

Skye stumbles upon the remains of dead fairies at the store and is approached by Kheelan who has been sent to investigate the pixie murders. Skye falls for him--only to discover he's using her to win his freedom. He tells her she is half-fairy and has secret powers, but Skye finds it hard to believe when she can never get a spell to work.

As Samhain, the witch's Halloween, draws near she must make a bold move to claim her heritage and power, restore order in the fairy realm, and try to win Kheelan's freedom and love. Absinthe, autism and augury meld into a paranormal cauldron where fairies are sly tricksters waiting to trap you in their Realm.

As usual, Debbie Herbert created a stellar story that will stay with me for a long, long time.  Skye is the young lady most of us were in our late teens; a confused, still-searching-for-herself adolescent who doesn’t give herself enough credit.  I loved how well I could relate to her character.  Kheenan was complex and multi-dimensional, demonstrating the effects of a lifetime of abuse and neglect while still allowing the story to stay light. The magic and world-building was astoundingly vivid and colorful, while the storyline flowed perfectly with sprinklings of real-life social issues throughout (the slavery of the human race by fairies for one).  The amount of research that went into every detail was obvious.  Debbie made sure she knew her stones and her fae mythology inside and out.  Of course, I expected nothing less.  Debbie has once again displayed a bounty of talent for the creative writing process, officially making her my favorite author of 2015!