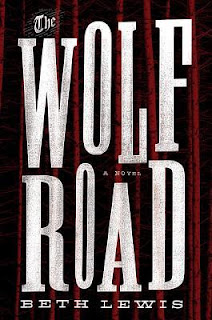 Goodreads Blurb:
True Grit meets The Road in this postapocalyptic psychological thriller--narrated by a young girl who has just learned that her adopted father may be a serial killer, and that she may be his next victim.

In the remote wilds of a ravaged land, Elka has been raised by a man who isn't her father. Since finding her wandering in the woods when she was seven, he has taught her how to hunt, shoot, set snares and start fires--everything she needs to survive. All she knows of the world outside is gleaned from whispers of a cataclysmic event that turned the clock back on civilization by a hundred and fifty years and reduced governments and technology to shambles, leaving men at the mercy of the elements--and each other.

Everything changes when Elka learns that the man she has been calling father is harboring a terrible secret. Armed with nothing but her knife and her wiles, she decides to escape his clutches and sets out on a long journey to the frozen north in the hope of finding her long-lost parents.

But as the trail of blood and bodies grows in her path, Elka realizes that daddy won't be letting his little girl go without a fight. If she's going to survive, she'll have to turn and confront not just him, but the truth about what he's turned her into.

My Review:
I've been on a thriller kick as of late, and Wolf Road tops the cake.  If I had an award to give Beth Lewis for the best book I've read all year, I'd give it to her in a heart beat.  What an amazing journey written through the eyes of a young girl brought up to be wild.  I loved everything about this story.  It's written in a very deep point of view, right down to the southern, uneducated dialect.  The unique writing style took me about a chapter to get used to, but it lent so much to the book.  I honestly felt as if I was living the terrifying adventure through Elka, not like I was on the outside looking in.  Beth broke all the rules with this one, going so far as to start the book with the ending.  She took a lot of risks, and it paid off BIG TIME.  I can't say enough great things about it.

**I received this book for free by Blogging For Books in exchange for a honest review**
Posted by Mary Elizabeth at 4:23 PM