STEP INTO THE FOLD.
IT’S PERFECTLY SAFE.
The folks in Mike Erikson's small New England town would say he's just your average, everyday guy. And that's exactly how Mike likes it. Sure, the life he's chosen isn’t much of a challenge to someone with his unique gifts, but he’s content with his quiet and peaceful existence.

That is, until an old friend presents him with an irresistible mystery, one that Mike is uniquely qualified to solve: far out in the California desert, a team of DARPA scientists has invented a device they affectionately call the Albuquerque Door. Using a cryptic computer equation and magnetic fields to “fold” dimensions, it shrinks distances so that a traveler can travel hundreds of feet with a single step.

The invention promises to make mankind’s dreams of teleportation a reality. And, the scientists insist, traveling through the Door is completely safe.

Yet evidence is mounting that this miraculous machine isn’t quite what it seems—and that its creators are harboring a dangerous secret.

As his investigations draw him deeper into the puzzle, Mike begins to fear there’s only one answer that makes sense. And if he’s right, it may only be a matter of time before the project destroys…everything.

A cunningly inventive mystery featuring a hero worthy of Sherlock Holmes and a terrifying final twist you’ll never see coming, The Fold is that rarest of things: a genuinely page-turning science-fiction thriller. Step inside its pages and learn why author Peter Clines has already won legions of loyal fans.

The premise of this story was SO promising, and I was so excited to dive right into this book.  Enter chapter one: pure excitement and grabs you straight from the get-go.  As you get further in, the amount of research that went into all the little details becomes obvious.  The characterization was my favorite thing about this book, though. Leland (Mike), the main character, has so many unique character traits that were articulated so well it became easy to feel like you knew him.  The secondary characters are treated with just as much care, to the point where you didn't need a tagline to know who was speaking.  That said, I struggled to stay interested in the story.  After the first couple of chapters, the story slows significantly, then towards the middle it gets crazy again, then drags out some more until the end.  Personally, I feel like about 75 pages of the story could have been taken out and I would've enjoyed it much more. 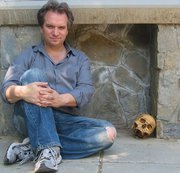 Peter Clines is the author of the genre-blending -14- and the Ex-Heroes series.

He grew up in the Stephen King fallout zone of Maine and--inspired by comic books, Star Wars, and Saturday morning cartoons--started writing at the age of eight with his first epic novel, Lizard Men From The Center of The Earth(unreleased).

He made his first writing sale at age seventeen to a local newspaper, and at the age of nineteen he completed his quadruple-PhD studies in English literature, archaeology, quantum physics, and interpretive dance. In 2008, while surfing Hawaii's Keauwaula Beach, he thought up a viable way to maintain cold fusion that would also solve world hunger, but forgot about it when he ran into actress Yvonne Strahvorski back on the beach and she offered to buy him a drink. He was the inspiration for both the epic poem Beowulf and the motion picture Raiders of the Lost Ark, and is single-handedly responsible for repelling the Martian Invasion of 1938 that occurred in Grovers Mills, New Jersey. Eleven sonnets he wrote to impress a girl in high school were all later found and attributed to Shakespeare.

He is the writer of countless film articles, several short stories, The Junkie Quatrain, the rarely-read The Eerie Adventures of the Lycanthrope Robinson Crusoe, the poorly-named website Writer on Writing , and an as-yet-undiscovered Dead Sea Scroll.

He currently lives and writes somewhere in southern California.

There is compelling evidence that he is, in fact, the Lindbergh baby.
Posted by Mary Elizabeth at 9:46 AM