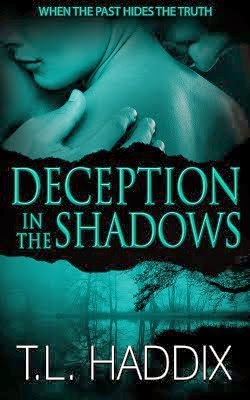 Buy DECEPTION IN THE SHADOWS

When all the lies come to light, nothing will be the same.

From the time she came to live with her uncle Ron after the tragic deaths of her parents when she was a young girl, Carrie Greer never had reason to doubt she was wanted.  Now a dispatcher with the county, she's a grown woman building a life of her own.  But after a trip to Florida, her uncle's attitude changes...and not for the better.  While struggle to come to terms with this shift in their relationship and all the collateral damage it causes, another tragedy strikes.  Ron Smith is murdered.  And the only person with an obvious reason to want him dead...is Carrie.

Robbie Bailey is finally free to pursue his lifelong dream of becoming a teacher.  But instead of attending classes, he ends up having to return to Leroy and to Carrie, the girl he's been in love with since he was a teenager.  He finds himself in the position of having to convince her of the depth of his feelings while protecting her from a vengeful killer bent on keeping long-buried secrets hidden.  And he isn't sure he can succeed at either task.

Deception in the Shadows is the sixth installment in the Shadows/Leroy's Sins Collection, a series of Romantic Suspense novels by author T.L. Haddix.  Other titles include Secrets in the Shadows, Uncle the Moon's Shadow, and In the Heart's Shadow.


The tastefully appointed den was quiet, save the sounds of the antique clock ticking on the mantel and the occasional popping of the logs that burned sedately in the fireplace. The room’s two occupants were holding an entire conversation with their eyes, as the woman seated behind the ornate mahogany desk turned an envelope corner to corner to corner. The socially polite smile she usually wore was absent, a cold harshness in its place that would have surprised most who knew her.
That harshness was no surprise to the man seated in the comfortable leather chair in front of the desk. Trey London shifted, moving so that he could set the cut-glass tumbler he held on a strategically placed coaster on the table beside him.
“How do you want to handle this?” he finally asked. His voice was quiet, even though they were alone in the big house and being overheard wasn’t a concern. Most things he did, he did quietly. People found his calm demeanor reassuring for the most part, with only a handful seeing that predatory watchfulness for what it truly was.
She sat forward, stunningly elegant even though she was attired in a simple blouse and skirt. Her fingers ran across the top of the envelope where she’d slit it with the pearl-handled letter opener earlier that day. “The same way we handled all Hatcher’s other little… indiscretions. Quickly and without blinking. Making those go away was fairly simple, and I see no reason this has to be different. You’ll take care of it?”
He nodded. “Of course. You know this will have to be dealt with in a more severe fashion than the rest. We can’t pay him off or scare him off.”
An arched eyebrow lifted as she gave a little shake of her head. “I’m aware. And I don’t care. He’s not worth my concern. Do you have a problem doing it?”
“You know I don’t. I’ve not spent the last fifteen years protecting your interests only to balk now. When?”
“Soon. The sooner, the better.” She lifted her own glass and took a sip of the amber liquid it contained. In the firelight and the warm glow of the Tiffany lamp perched on the edge of her
desk, he saw her lips lift into a tiny smirk. “I worked too hard to get where I am to let someone traipse in and take it all from me with this kind of drivel. Hatcher and I never saw eye-to-eye about how these matters should be handled. Apparently, he’s been paying through the nose to keep this quiet. Well, this bitch doesn’t pay.”
That was the God’s honest truth, he knew. Oh, she compensated him well, very well, to act as clean-up man for whatever needed to be swept under the rug, but that was part of their understanding. He made problems go away; that was his job. And he was good at it. In the grand scheme of things, removing this newest problem wasn’t even the vilest act he’d ever performed to keep her safe. But it would be the first time he’d ever killed for her.
“I’ll see that it’s done.” He stood and straightened his sweater before leaving.
She stopped him as he reached the door.
“If you could make it look like an accident, that would probably be best. And we’ll need to find out what he has written down or stashed away, and make sure it disappears as well. Because you know he’ll have something. They always do.”
“Of course they do. I’ll take care of it. You know I will.”
“Why else would I keep you around?” Her eyes dropped to his crotch, and he shut the door of the den back with a quiet snick.
Watching her smile was like looking into the eyes of a shark, and despite the emptiness, he felt an odd sexual thrill run up his spine as she traced the edge of her glass with a blood-red fingernail.
“Why else, indeed?” He went to her, knowing better than to wait for her to come to him while she was in this sort of mood, and stood at the corner of her desk as he waited for instructions. His arousal grew as she slowly unbuttoned her shirt and stood, only to kneel before him. Of all the perks of his job, he thought, closing his eyes as her mouth found its way to him and started working skillfully, this was his favorite. The thrill of the danger of knowing she could have him killed, or that he’d be imprisoned for the rest of his life if the crimes he had committed on her behalf came to light, just added to his pleasure.

T.L. Haddix was born in Hazard, Kentucky, a small town in the center of the Appalachian coal fields. Taught to read by her grandmother, T.L. has had a life-long love affair with books, devouring whatever she could get her hands on. From childhood favorites such as the Trixie Belden series and Laura Ingalls Wilder’s “Little House” books, to her current favorites from authors like Tami Hoag, Alex Kava, J.A. Jance and Lisa Kleypas (among many others), T.L. still finds refuge in the written word.

“Growing up, I wanted to be everything – astronaut, police officer, doctor, teacher, reporter, psychologist – there was no clear choice for me. I wanted to do it all. Becoming a writer has allowed me to do just that, because I can live vicariously through my characters.”

A resident of eastern Kentucky, T.L. is hard at work on her next book, when she isn’t chasing after her three cat-children with her husband.