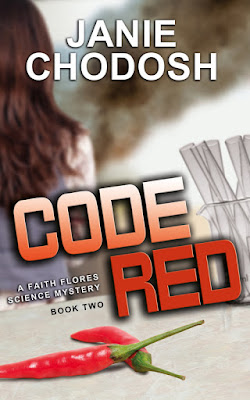 After nailing the murderer of her addict mom and proving that her detractors are full of it, seventeen-year-old Faith Flores is back for another kick-ass science mystery. She's proud to be chosen for a summer internship at a research lab in Santa Fe, New Mexico, but once she arrives, complications abound. For one thing, Santa Fe is the birthplace of the father she's never met, and for another, she clashes with a local environmentalist trying to pull the plug on the genetically modified chiles her new boss is engineering. She and violin prodigy, Clem, learn of a new teen drug called liquid gold while discreetly researching the family angle. The chip on Faith's shoulder is still there, but so is her determination to uncover the truth when a girl she meets at a party dies from an overdose of liquid gold.

I should join the bevy of arts and academic interns bonding in clumps of polite, socially correct conversation. At least, if I’m going to be antisocial I should be harnessing the power of positive thought and thinking, Wow! Here I am—St. John’s College in Santa Fe, New Mexico! Or, wow! What an honor, out of all the science geeks around the nation, the Salazar Center for Plant Genomics chose me as their summer student scholar!
Instead, I sit alone in a window seat overlooking a confusion of mountains and arroyos, no idea what to say to any of the other interns who look so at ease and whose off-resume experiences probably don’t include waiting in the backseat of some beater while their mom scored a fix. Not to mention that if I were to actually open my mouth what would come out would likely have a high lab geek element. And then there’s the nagging distraction of The Jerk, also known as The Sperm Donor, sometimes known as my father, who I happen to know was born here and could still be hanging around.

I spin around, absolutely no idea how long I’ve been staring out the window, to gape at a tall guy standing in front of me who might be Hispanic, might be black, and might be in competition with Jesse, my Philly boyfriend, for the cutest boy I’ve ever seen. To make up for the fact that I seem to have forgotten how to speak, I jam my hands on my hips and
demand an explanation for how he knew my name.

“Um. That would be your nametag?”


Previous book in the series (click on image for Goodreads link):

About the Author
To write for teens, listen to teens.I have been listening to teens and young-adults for most of my adult life. As a middle school and high school teacher, I am immersed in the voices of young people. Daily, I listen to their irony and wit, their drama and humor. It is these voices that fuel my desire to write for young adults.Besides being a writer and a teacher, I am a mom, an avid outdoors person, reader, observer of life, and a scientist wannabe. However, since I realized I only liked to muck around in the field in cool places and would never actually be a scientist, I married one.When not writing, I like to hang out with my family, rock climb, try to grow a garden in the arid southwest, bird watch, travel, and attempt to play Klezmer music on my violin.

GIVEAWAY:
a Rafflecopter giveaway
Posted by Mary Elizabeth at 3:00 AM