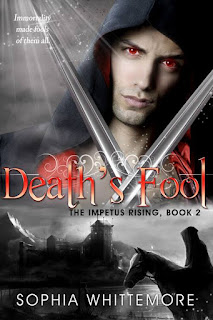 TITLE: DEATH’S FOOL- 2nd Book in the Impetus Rising Series
AUTHOR: By Sophia Whittemore
BLURB:         “Isak was love. Isak was bravery. Isak was death.”
Her lover has been cursed. Her mother has been kidnapped. Her best friend’s soul has been stolen and his body deformed. And Diana is afraid that she too is turning into a bloodthirsty monster, just like her father. Awoken from an enchantment placed on her by her treacherous lover, the half-Impetus god, half mortal Diana is flung into a war between mutant shadows and the Impetus beings. Diana must navigate a world where queens torture their faithful knights, human children play with giants, and magic has darkness within it. Diana knows she has some power within her, some sleeping evil that demands to be set free. But is she truly her father, or is she her own person? Secrets are revealed to her about the cursed Prince Isaakios that she never knew before, secrets like the women he once had in his life, or the havoc he once wreaked upon the Earth. How far will this twisted love go for Diana before she is broken? Or will she break before she even gets the chance to save the world one last time?
EXCERPT:
Suddenly, a scream sounded through the luxurious halls. A candle tipped over and a fire started on one of the curtains. The ice sculpture began to tip, its base melting from the flames. Pride put out the fire with his strong hands, yanking the curtain down and dousing it in buckets of water with the help of some humans. I looked to see who could have ruined this moment and felt the ground quake. The doors slammed open, causing the floor to tremble beneath us. I nearly lost my footing. The dress disappeared and I was back in sensible training clothing and gear. It had all been an enchantment, a beautiful dream for as long as it lasted.
And now, back to the present, I saw a darkened figure coming toward us. The candles blazed higher upon the figure’s approach. Face hidden beneath a tattered hood, his eyes gleamed, murky brown, his skin, once bronzed, was now a dull, ashier gray. I peered closely at the boy’s black hair and saw Basel’s face hidden beneath it, stubble dotting worn, drawn features. He staggered against a table with party favors. He shoved slices of turkey into his mouth with stubbed, bloody fingernails, eating like a starving animal.
Appetite filled, he reached for a pitcher of dizzying nectar and drank it by scooping it up with his hands. His eyes were wild, his laser-focus disconcerting, floating everywhere at once. His gaze narrowed when he saw me. “It’s you!” The creature that once was Basel roared, voice nearly hitting the same pitch as an ethereal wail. “I know your face. You’re the one that cursed me to be…to be…”
He looked down at his body as though seeing it for the very first time. His veins, once swollen with shadow venom, were now empty and a scarily pale blue as the blood had drained haphazardly from them.
“What am I?” he asked, his voice dropping to the same voice of the confused boy who fell out of his treehouse and wanted to cry for his mommy back when we were little children. “Tell me what I am!”
I moved to go to him, but Isak held out an arm. “Don’t do that.” His gaze was stern, taking in all of Basel’s appearance in the cool, calm way of a medical professional. “I’ve seen this before.”
“Yes, but what is this?” I looked at Basel, swinging about like a violent animal. “Shouldn’t we go to help him? Perhaps he escaped from my father’s grasp—”
“No, he didn’t escape. Your father let him go.” 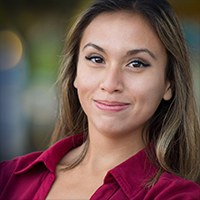 AUTHOR BIO:
Sophia Whittemore is a Dartmouth student and multiracial author with an Indonesian mother and a Minnesotan father. She has had book signings at Barnes & Noble for her Impetus Rising Series, available on Amazon and other outlets, the first book published when she was only seventeen. She has been featured as a Standout in the Daily Herald and a Rad Reads author in Girls' Life Magazine. Her love for the English language manifested itself in eighth grade when she went to the Scripps National Spelling Bee and has continued with other languages such as Spanish and Indonesian. Her prior publications include "A Clock's Work" in a Handersen Publishing magazine, “Blind Man’s Bluff” in Parallel Ink, and winning multiple awards in the Best Midwestern Writing competition for high school writers. She currently resides in Chicago, Illinois with her family and food-loving mini schnauzer called Tiger. Drawing on inspiration from her two cultural backgrounds, Sophia lives a life playing tennis, traveling, and writing about her dual life experiences through other characters in her works or on her blog.
AUTHOR’S SOCIAL MEDIA LINKS:
Twitter: https://twitter.com/sophiawhitte
Facebook: https://www.facebook.com/Authorsophiawhittemore/
Instagram: @authorsophiawhittemore
Tumblr: http://authorsophiawhitte.tumblr.com/
Wordpress: https://sophiawhittemore.com
COVER ART: