Book Review: WHEN WE WERE HUMAN by Kate L. Mary


Title: When We Were Human
Author: Kate L. Mary
Category/Genre: Apocalyptic Upper YA
My Star Rating: 4/5 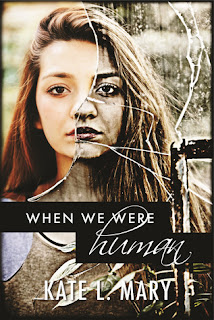 “They came four years ago. Invaded our planet, rounded us up, decimated the human race. We fought back, and some even say we won, but they’re wrong. The invaders took everything from us. Our family. Our hope. Our humanity. We won the war, but there are no humans left. Only monsters who will do anything to survive. Some look human and some don’t, but they are all the same.”

Eighteen-year-old Eva has spent the last year punishing herself for her sister’s death and hiding from everyone she comes into contact with, human or otherwise. With the population destroyed and the Earth left in ruins, she sees little hope left for the future.

But when she crosses paths with Walker and Tara something inside her awakens. Something she thought had died along with her entire family. In these new friends Eva sees a promise of what the future could be, as well as evidence that humanity might not be extinct after all.

When a ghost from Eva’s past makes an unexpected appearance, the group sets out on a cross-country trek that will teach Eva how to love and hope again, and will remind her what it truly means to be human.

So let's talk about aliens.  I LOVE them. Okay, my husband might say I have a secret obsession with them.  Ancient Aliens is pretty much permanently on my TV when he isn't around (the show freaks him out).  I don't, however, read too many fiction books about them.  I'm a romance junkie, and the idea of a human fornicating with an alien species kind of skives me out.  Why I haven't seen an alternative like WHEN WE WERE HUMAN before is anybody's guess.  But I loved it!

I got my alien fix, I got my romance fix.  The two didn't touch, but they kind of did.  Kate wove the two together seamlessly, making each was a vital part of the plot.  Too cool.

You will immediately be sympathetic to Eva.  Kate tackled some real issues with her character.  She finds herself turning into a monster; the only way she knows how to handle the transition is to self-destruct.  In comes Walker and baby sister Lilly to save her from herself.  Two totally different kinds of love, both crucial to the survival of Eva's humanity.

I didn't care for the ending so much, though.  It just kind of ended.  No huge climactic event...just, hey, we're all happy now.  Which is cool if there's a second book.  Maybe there's more to come?
Posted by Mary Elizabeth at 1:00 AM