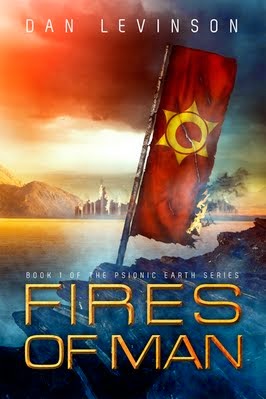 In a world where a gifted few can manipulate reality with their minds, two great nations—Calchis and Orion—employ these psionic powers in a covert war for global superiority.

In the heart of Calchis, a powerful young psion named Aaron Waverly is kidnapped, and forcibly conscripted. To the north, in the capital, a plan is hatched to decimate Orion, to be carried out by the ruthless operative known only as “Agent.”

In Orion, fresh recruit Stockton Finn comes to terms with his incredible new powers, and learns firsthand how dangerous they can be. Meanwhile, officers Nyne Allen and Kay Barrett navigate the aftermath of their shattered love affair, oblivious to the fact that Calchis draws ever closer to destroying the tenuous peace.

Finally, in the arctic land of Zenith, Calchan archaeologist Faith Santia unearths a millennia-old ruin. This lost temple might just hold the hidden history of psionic powers, as well as hints of a deeper mystery . . . that could shake the foundations of all mankind.

He ran toward the edge of the cliff.
The sun beat down upon him as his limbs pumped. Earth crunched beneath his feet, and a breeze blew across his black-stubbled scalp. His breathing was calm, meticulously measured.
When the ground slipped away, he felt only anticipation.
Plummeting, the man inhaled. Power flooded into him, thrilling, delicious. He reached out with that power, warping reality with an energy born from the depths of his being. Suddenly . . .
He winked out of existence . . .
And then reappeared at the base of the cliff.

Born and raised on Long Island, NY, Dan grew up immersing himself in fantastical worlds. While other kids dreamed of being astronauts and cowboys, all he ever wanted was to be a novelist. Now, he’s living his dream.